Parenting is not something we’re meant to do in isolation. We do it (or at least we are meant to) in the context of extended family, community and society, with various people and organisations supporting us in our parenting and playing a role in rearing our children and helping them grow into caring, emotionally mature adults. In other words,  “It takes a village to raise a child.” As adults, we all have a responsibility to the next generation. The same could be said of breastfeeding. The responsibility for making breastfeeding work does not lie solely with the mother and her baby, but with a whole team of individuals and entities who all in some way help to support and protect the breastfeeding relationship.

Some time ago I asked a more experienced IBCLC colleague for tips on working in private practice (thank you Nicola O’Byrne) and one of the things she said to me was to always remember that I am part of a team; a team that is helping a mother to achieve her breastfeeding goals. Other team members might include midwives, public health nurses, GPs, paediatricians, doulas, voluntary breastfeeding counsellors, paediatric osteopaths or cranio sacral therapists, antenatal teachers, other breastfeeding mothers, grandparents, partners, extended family, friends, and even strangers. The smile or kind words of support to a new breastfeeding mother in a café matter and can help to make a difference to that mother’s confidence in feeding out and about. The following account is from one of my clients and I think it illustrates quite nicely just how many different people can be involved in helping a mother achieve her breastfeeding goals.

“When my baby was born she was placed immediately on my chest. She found my breast and tried to latch but couldn’t. As the hours and days went on we realised that all was not as it should be. With the help of the midwives on the ward (including the hospital’s lactation consultant) we tried over and over to help her latch and suckle. After two days of constant skin to skin, nipple shields, painful hand expressing and lots of tears we gave up and supplemented what little colostrum I expressed with formula. My baby didn’t open her mouth wide to take in the breast and became very frustrated. She had a lot of trouble swallowing my expressed colostrum from a syringe and when attempting to bottle feed her formula.

As I was under the care of Community midwives, I had home visits for 7 days after my baby’s birth. With their help I pumped, fed with nipple shields and topped up with formula until my milk came in. She began to swallow on day 4 and eventually I was able to stop pumping and supplementing with formula and feed her exclusively with nipple shields. It was very painful for me to feed even with the shields.
The community midwives suggested that I look for support from a lactation consultant and I got in touch with Caoimhe (highly recommended by Gentlebirth and a few friends). Caoimhe identified a posterior tongue tie but advised we wait a few weeks before referring her for release.

I attempted to latch her without the shields for the following 3 weeks. She could latch for a minute at a time but the pain was excruciating.  She also became very sleepy almost immediately when I fed her and I had to use breast compressions to encourage her to feed.

At our follow up consultation with Caoimhe (6 weeks old), Caoimhe advised referring our baby for tongue tie release. At 7 weeks, she was assessed by Dr. Siun Murphy who confirmed that there was a strong posterior tongue tie. She carried out the frenotomy and we had a consultation with the on site lactation consultant. That same day we noticed that our baby was sticking her tongue out and rolling it around her mouth. She had never done this before! I put her to the breast that afternoon and we fed pain free for the first time ever! I could feel her tongue moving against my areola! She was alert and awake for most of the feed and seemed very satisfied afterwards!

Latching and feeding my baby is getting easier each day. The frenotomy has given me the confidence to continue exclusively breastfeeding. Without it I would have struggled to continue without formula.”
So all in all, working through and finding solutions to the various breastfeeding challenges that this mother faced required input from various members of her ‘team,’ which although he isn’t mentioned above, included a very supportive partner.

We often hear the word ‘guilt’ used in the context of a breastfeeding journey that ended before a mother had hoped it would; guilt that she somehow ‘failed’ at breastfeeding. She feels it’s something she did, or didn’t do or that she didn’t try hard enough. But the reality is that she was failed by a lack of adequate support. Making breastfeeding work is a collective responsibility. It does not lie solely with the mother so when describing breastfeeding goals that were not met, the words ‘guilt’ and ‘failure’ should never be used. 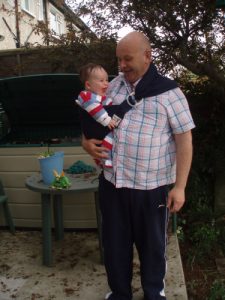 I was lucky enough to have some very supportive people on my team through my years of breastfeeding my babies (10 years in all!). I’ve included photos here of my mum Mary, who although she didn’t breastfeed herself  has been an amazing support to me. She had her babies in the 1970’s and as a middle class mammy in Ireland, breastfeeding just was not part of the conversation. You formula fed, period. The system failed her. Even if she had decided to breastfeed there would have been zero to no support available for her. But despite all this, she has been very much a ‘breastfeeding granny’, ie a granny who is supportive of her grandchildren being breastfed. The other photo is of the other big support to me, my husband Ronan. Without his love and support, I would never have been able to breastfeed my babies for as long as I did.

So, if you are intending to breastfeed, think about the team that is going to support you. It’s not just about you 😉