Very often when I see mother-infant dyads who are having significant breastfeeding challenges, I discover during the course of the consultation that they have had a difficult pregnancy and/or birth experience and that the baby has some structural issues which are impacting on breastfeeding, eg torticollis, tight muscles in the body, torsion through the spine, poor suck/swallow/breathe coordination or asymmetry. (For more detail on structural issues see an earlier blog I wrote on Breastfeeding and Bodywork.) In these situations, one of the things I normally suggest is bodywork for the baby, such as craniosacral therapy, osteopathy, physiotherapy or amatsu therapy. Naturally many parents are a little sceptical and unsure, as they may not be familiar with the concept of manual therapy for babies. It’s usually only after a treatment that they come to understand their baby’s issues and why bodywork was necessary.

I asked some of my clients to share their experiences of bodywork, as I felt this might help other parents who are considering treatment for their babies. With varying combinations of breastfeeding support, work on positioning, bodywork, time, growth and in some cases tongue tie release, all of these clients and their babies eventually achieved pain-free, effective breastfeeding. As a lactation consultant, my job would be a whole lot easier (albeit less interesting!) if I had a magic wand I could wave at breastfeeding challenges to make them instantly go away. But there is rarely a quick fix for the complex cases, and often it can take weeks or even months for a mum to reach her breastfeeding goals.

I first saw Emma and her baby Lucy when Lucy was 2 weeks old. Lucy had had an emergency c-section birth. She had sore and damaged nipples and Lucy had not yet regained her birth weight.

“I had low milk supply and the pain of Lucy latching was unbearable. There were a lot of tears. I was told it would hurt, but I knew this couldn’t be normal. I was trying to get all the help a new mom could avail of. Finally, I called Caoimhe. After assessing Lucy on and off the breast, Caoimhe identified a posterior tongue tie and noticed there was a slight curvature in Lucy’s spine. She recommended we take her to see an osteopath to help the tightness in her muscles.

We went to see Catherine Dolan at MoreHealth in Blackrock. I didn’t know what to expect really, but not only did Catherine work extremely gently with Lucy, she was incredibly knowledgeable about WHY things happen with babies and WHAT causes it. Difficulty winding, hiccups, reflux, pain while feeding…the list goes on. I couldn’t believe how much I learned in that first appointment. This helped me learn how to more effectively troubleshoot when anything seemed amiss.

The body work seemed to loosen out Lucy’s tiny muscles and she seemed more comfortable not only breastfeeding but in general. I could see and feel a difference in her posture, and we were also given both mouth/tongue and body exercises to do at home. In my opinion this is a sign of a good practice…there aren’t follow ups after follow ups like with some practitioners. She gave us a 7-day window and if we didn’t see improvements or felt like we needed a follow up, to schedule one in.

As it turns out, the only thing that would completely fix our supply and latch issues was getting her tongue tie released. But, I do believe that the tie release combined with the bodywork is what finally got us on the right path with breastfeeding. We’re now 4 months into our journey and loving every minute!”

*Please Note: This mum and baby’s names have been changed to protect their anonymity

Aidan was 10 weeks old when I visited him and his Mum Sarah. He was extremely fussy when feeding at the breast. He struggled with the flow, kept popping on and off and seemed quite stressed. I identified a tight posterior tie, and also noted that Aidan seemed to be holding on to a lot of tension in his upper body. 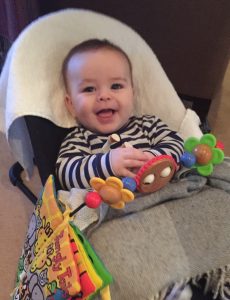 “I was having trouble breastfeeding my son, he was becoming frustrated and upset every time he tried to latch on. I contacted Caoimhe for help and she visited us at home to see what was going on, he was 10 weeks old at the time. Caoimhe could see when the baby was trying to feed that he was having difficulty and noticed that he had a posterior tongue tie and that his shoulders were very tight. She explained that before looking at having the tongue tie released through cutting it, it would be helpful to try some bodywork on the baby as this can make a difference. I made an appointment with a specialist that Caoimhe recommended and took Aidan to see her. She made some very gentle manipulations to Aidan’s neck and shoulders and also did some releasing on the roof of his mouth. He was happy throughout the treatment however he did vomit straight after. This I think was because of some sort of a release of tension and is apparently common. In the days following the treatment Aidan was a bit more upset when feeding, this was because he had learned to somewhat cope with feeding with the tongue tie and now that the tension was gone from his mouth, neck and shoulders he was once again having to learn to a new way to cope with feeding.

We ultimately decided to bring him to a specialist to have the tongue tie released through having it cut and it was this that worked for us in allowing Aidan to breastfeed easily. I am glad though that he had the body work as after a difficult labour where he had to have a suction cup on his head, I felt it was important for him to have some of the tension released from his body. I also wanted to try this approach before resorting to cutting the tongue tie. I felt we had explored all avenues before having the procedure.”

I first saw Jane when baby Liam was one week old. Jane had cracked and painful nipples, and her right nipple was compressed/lipstick shaped after feeds. Liam seemed to have a lot of tension in his body and was clamping during feeds. We worked on laidback positioning, which helped, but Jane continued to struggle with feeding on the right side. I advised her to bring Liam to a paediatric osteopath and this is her account of that experience:

“To my surprise, it was a beautiful experience, watching the osteopath work in the most gentle and almost imperceptible way on tiny Liam. He had been curled in a ball since birth and for the first time I saw him relax out. Watching carefully, I could see how the left-hand side of his body was tighter than the right and his movements were restricted when the osteopath worked gently on him. Inside his mouth, the left side of his jaw was tighter too. The Osteopath suggested a 2nd session. As soon as Liam was laid down for this 2nd session and the Osteopath laid his hands on him, Liam’s whole body relaxed again as it had by the end of the previous session. It was incredible to see. The Osteopath worked again on the tightness. By 6 weeks I was feeding comfortably on both sides. He’s remained on the 0.4 percentile but the happiness he exudes is enormous!”

*Please Note: This mum and baby’s names have been changed to protect their anonymity

Suvi is a friend who contacted me to ask for advice as she was having difficulty with feeding Penny on one side. This is what Suvi said about her experience of bringing Penny to a craniosacral therapist: 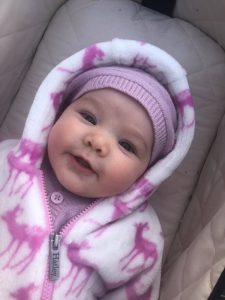 “I went to see Darina when my daughter Penny was just a few weeks old. Although Penny took to breastfeeding very well and was gaining weight, we had issues with a shallow latch on my right side. This resulted in painful feeding and even a bruised nipple. A pediatrician examined her for tongue tie and we had our positioning looked at by a few different breastfeeding counsellors but things did not improve. I rang Caoimhe for further advice and she suggested a bit of body work. I was skeptical at first but was willing to try anything to help with our feeding journey. We went to see Darina in her own home and it was just lovely. A warm welcoming environment, where I could feed throughout our session, and there was parking in her front garden. With a heavy car seat and happy bag to carry on my own – it was a joy that I only had to walk a few steps. After our session I saw an immediate improvement in Penny’s head and neck mobility and her latch also started to slowly improve and the nipple pain went away completely. But regardless of the improvements we saw I really enjoyed spending 30 minutes of my day where my undivided attention was on my daughter. As my second child, with school runs and laundry to do it can be a little more challenging to give them the adoring attention they deserve. The session was a little time for us to have out one on one bonding time. And it was just lovely.”